This is the first in a series of posts being published simultaneously by Roaringwater Journal and the Ballydehob Arts Museum, celebrating 33 years of an aspect of art history in West Cork. The Living Landscape series of art exhibitions ran from 1987 to 1996, masterminded and driven by the energies of Cóilín Murray. Cóilín has recently donated an invaluable file of photographs to the Museum, connected to a sculpture trail which was set up between Skibbereen and Schull in the early 1990s as part of this project. We are indebted to Cóilín for these items, and I will be using many of them in these posts. 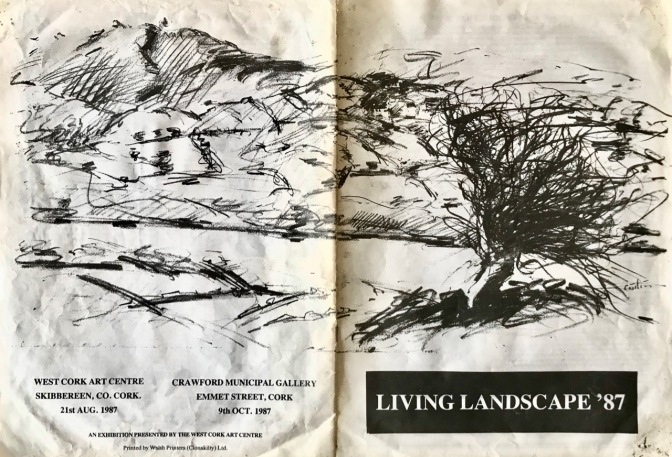 Catalogue from the first Living Landscape exhibition, launched by the West Cork Arts centre and the Crawford Gallery, Cork, in 1987. The cover illustration is by Cóilín Murray

It’s fascinating to trace the sculptures which were set up more than 25 years ago along the N71 and R592 roads connecting Skibbereen with Schull. Most have vanished – some back to nature, some through destruction. But those which remain are now ‘enigmatic’ and must often excite comment and questions. This is particularly the case with the one in our header picture (taken recently), which is the central subject of today’s post. It’s a work by Michael Bulfin, born in 1939, one of Ireland’s most respected artists and a member of Aosdána (an association of artists whose work is deemed to have made an outstanding contribution to the creative arts in Ireland). The title of the sculpture is the title of this piece: Behold, Their Bright Shining Future Rising Before Them.

Michael Bulfin’s exhibition proposal was a piece of land art: a giant grass-covered earth pyramid crowned by a stainless steel pinnacle, with a cascade of boulders flowing down the surface – facing on to the main road running through the townland of Skeaghanore East. Upper, the design for the piece was submitted as a model. Lower – the inscription from the back of the original photograph.

The task of physically realising this monumental piece was the product of many hands, including a number of volunteers from West Cork’s artistic community. The following ‘work in progress’ shots document some captured moments in time.

In this shot, Michael Bulfin is on the ladder, and painter Maurice Desmond watches the process

The project was well publicised; here Mike Bulfin is being interviewed by Anita Whooley for RTE, with Cóilín Murray looking on 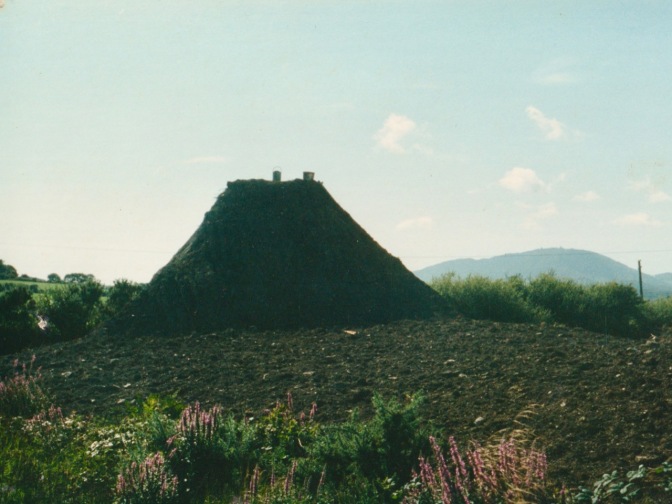 The mound ‘greening up’: the stainless steel pinnacle was added at a later date. The ‘cascade of boulders’ is not evident today, and may never have been installed 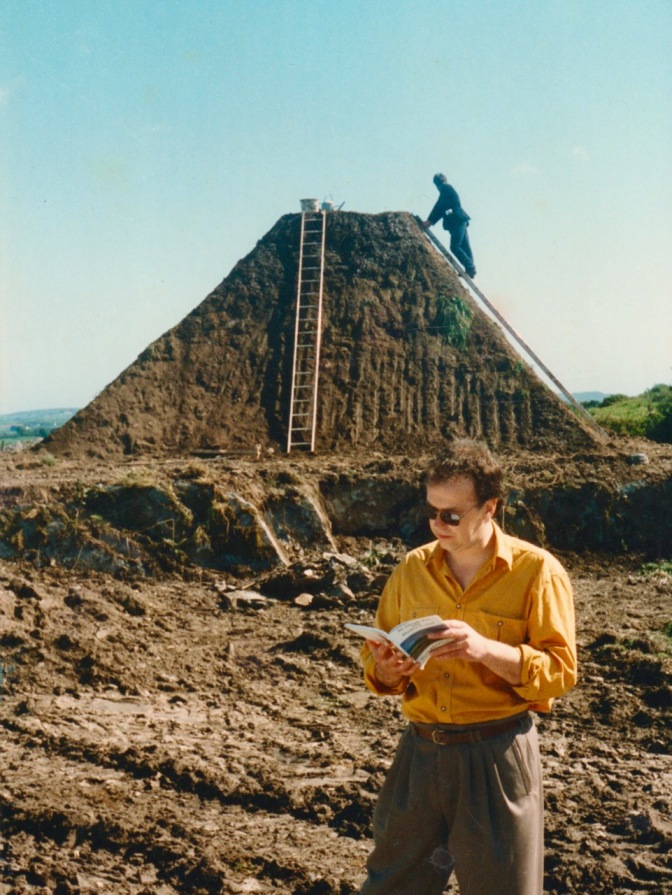 At the official opening of the Living Landscape Sculpture Trail the poet Steve McDonagh, founder of Brandon Books based in Dingle, Co Kerry, read from his work at each location. Steve McDonagh died in November 2010. As can be seen, the pyramid was unfinished on opening day!

Michael Bulfin remains active in Ireland to this day. He lives in Co Offaly, and there is impressive work from him at the Lough Boora Parklands, including the eye-catching ‘Skytrain’ sculpture:

Something that could be considered in the future is a creative project based on the West Cork Sculpture Trail. This might restore or resurrect some of the pieces from the 1990s, and provide an opportunity for new work to take the place of those sculptures which are now lost. 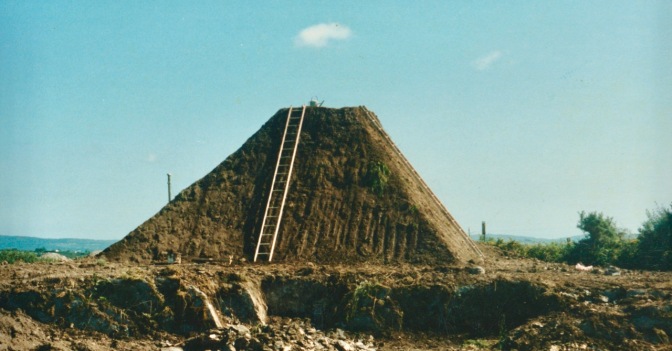 View all posts by Robert