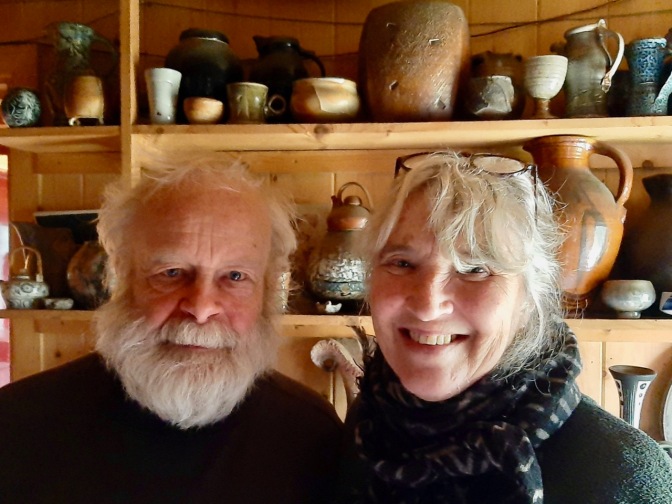 Etain Hickey and Jim Turner met when they were both working in Peter Arnold’s pottery in Alderney, on the Channel Islands. During that time they planned to set up their own pottery. Hickey was familiar with West Cork and they decided to move there in the mid-1970s, when the artists’ community in Ballydehob had become established. They eventually bought a  farmhouse at Rossmore and spent some years renovating it and realising their dream of a ceramics studio. The Rossmore Country Pottery remains active to this day and both artists are well-known for their work which is often shared, but also can be distinctively individual, displaying their years of experience with the wheel and the kiln.

Both artists continue to evolve their styles and have become a fixture in West Cork. Their work is displayed locally and nationally, and exhibitions of both artists are well attended and highly regarded. Etain Hickey’s current work is exploratory, narrative and delicate – and easily identified. Jim Turner’s work is organic and concentrates on shape and texture. He has successfully collaborated with another West Cork artist and resident, Brian Lalor: their exhibitions are always rewarding.

Rossmore Country Pottery is an established centre of creativity in the wildness of our West Cork landscape.

Above: Etain Hickey – Saint Gobnait, one of a series of plaques depicting female Irish saints. Below: Jim Turner – Paperclay I, from a recent series of experimental clay work. Bottom: Atlantic Way Jugs – current work from Rossmore Country Pottery, Made by Jim Turner and Etain Hickey